Is the price of energy an invisible gorilla?

In this piece we argue that the price of energy may be the largest obstacle to an energy efficiency breakthrough. Amongst a lot of talk on building insulation, consumer electronics labeling schemes and smart metering, eager advocates of energy efficiency may behave like the participants of the famous invisible gorilla experiment. Preoccupied by a given mind-set, they might fail to notice what is right in front of them: in this case, the (arguably low) price of energy.

Energy efficiency is one of the most baffling elements of today's European energy policy landscape. It could be by far the largest contributor to CO2 abatement worldwide and can be considered a low hanging fruit representing a win-win situation for all. Easing the energy import burden, creating job- and business opportunities, yielding environmental benefits all while saving money for consumers are just some of the most-cited benefits. What is puzzling is that despite significant political commitment and a myriad of policy initiatives and sporadic success stories, the EU is vastly off track in meeting its energy efficiency target of reducing consumption by 20% to 2020, indeed it falls short by about 50% (1). Clearly Member State policy makers are doing something wrong. 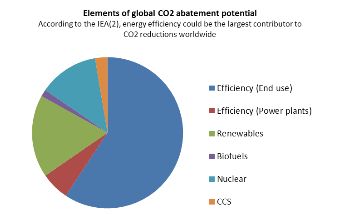 A report by the European Commission blames the shortfall on insufficient price signals, asymmetric information, missing markets and high initial costs as well as regulatory failures including poor enforcement and low level of dedication (1). The report proposes a comprehensive set of policy measures per sector to tackle the listed barriers. However, the Commission also concludes that "...the concrete results will depend on the level of ambition of the regulatory and non-regulatory initiatives and the pace at which they are implemented". In other words, implementation (and reaching the set target) is thus largely a question of political willpower. This is a rather misfortunate case, as we will argue in the following.


Good luck convincing a politician that energy prices are low

The above cited EC report lists insufficient price signals as one of the main factors impeding an energy efficiency breakthrough. This can be seen as a euphemism for the price of energy being unrealistically low, thus not reflecting the realities of demand-supply conditions and the many externalities arising from energy use. However, government dedication or political willpower in addressing this issue is not a given, by far. In fact, political interests may very well be in line with keeping prices low to "protect" consumers and businesses (and public institutions for that matter) from the true price of energy. Keeping environmental commitments and maintaining voter support thus seem to be conflicting goals, and predicting which one will overrule the other is not a hard guess.


Price is trying to send us a message

Classic economic theory tells us, that price is key to signaling demand and supply conditions in a given market. Concerning demand, the grave reality is that people will use more energy in the future, not less, with demographics and consumer habits as the key drivers. The growing number of one-person households has significantly increased the energy use per person (i.e. fewer people share a refrigerator or a washing machine), as has the growing appetite for space heating and appliances (3). This increase in demand and externalities that accompany it should be reflected in final energy prices. It could easily send a message to consumers that would trigger a change of behavior.


In-your-face or well-hidden: fossil fuel subsidies come in all shapes and colors

Several government policies distort final energy prices, one of them being fossil fuel subsidies. According to IEA chief economist Fatih Birol, phasing out fuel subsidies worldwide would actually provide half the solution for tackling climate change. Though the main culprits are actually countries outside of the EU, the message is also relevant for EU member states.

For example Belgium's economy minister Vande Lanotte has just recently revealed plans to freeze energy prices at their current levels for 2012. Meanwhile a publication of the OECD gives a detailed overview of the variety of budgetary support mechanisms of fossil fuels: regulated prices, social tariffs, tax exemptions, rebates and reductions are some of the most common forms.

While freezing prices, or fostering 'social tariffs' are some of the more blatant ways to shield consumers from realistic energy prices, more subtle methods exist as well. As a study by Peter Kaderják on Central-Eastern European electricity markets highlights, there is a practice in countries such as Poland, Hungary and the Czech Republic to have major state-owned electricity wholesale companies "absorb, at the cost of their profits, increasing producer prices instead of allowing this increase to be reflected immediately in final prices". These companies are thus operating at a loss or at zero profit levels, which is actually an implicit form of fossil fuel subsidies by governments. The fact that CEE countries top the list for total energy savings potential compared to GDP makes this observation all the more noteworthy. 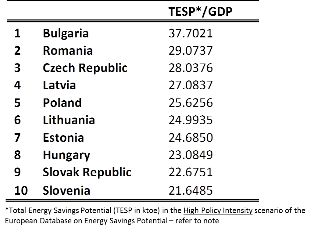 The message should be to 'stop digging'

Naturally we can't draw the conclusion that all forms of budgetary support and tax schemes aimed at fossil fuel consumption are inefficient, foster wasteful consumption or are environmentally harmful. However basic economic intuition on price signaling effects dictates subjecting these policies to detailed scrutiny as it may turn out that many of them are indeed impeding the achievement of the climate goals the EU has committed to. If that were to be the case, then the phrase "In order to climb out of a hole one first has to stop digging" should be the central message of anyone advocating energy efficiency.